“You have turned me into a wanton woman.” 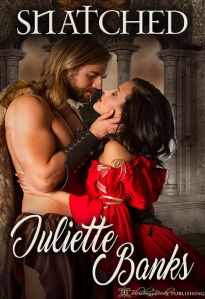 “And a wanton woman is just what I need.”

Place and time is 1850, An impoverished Eastern European country

Laryssa   is a 37-year-old woman who has been a widow since her 18-year-old daughter, Sofiya, was a baby.

Bhodan   is  the leader of a group of bandits who travel around the countryside robbing and pillaging, and sometimes abducting pretty young women. He is bitter and angry after a vicious fight when he was young caused him to gain two livid scars across his face.

What could have happened to bring these two together?

Laryssa leaves her house for a short while, and returns to find that the bandits have taken her beautiful daughter, the light of her life. She is distraught, and sets off to find and rescue her. Her travels take her to the ruined castle, where the bandits hide out, and she begs Bhodan to allow her to stay as a housekeeper and bedfellow, without revealing her connection to Sofiya.

Despite the intentions of both, they find that they have a strong, sexual attraction for each other, and Bhodan gradually becomes less angry with the world and more attracted to Laryssa, a woman who shows him what love and kindness – something he has never experienced before – can do.

One day, while out robbing, Bhodan returns seriously wounded – the only one of the four bandits to return to the castle. This provides the opportunity that Laryssa has been waiting for, the chance to escape with Sofiya. But if she takes that chance then she will be leaving Bhodan to die. Laryssa is torn between love for her daughter, and the increasing feelings she has developed for Bhodan. How can she choose between the love of her daughter and probably the only chance she will ever have for love.

NOTE: This book was previously published as a short novella with the same title. It has been amended and greatly extended to more than double its length.

The icy wind penetrated the woman’s flimsy cloak and went deep into her aching bones. It was almost dark, and the dense forest on either side of the track was gloomy and menacing. The trees made a creaking, moaning noise as the wind howled through them, and there came a sound of a distant wolf, but she tried not to be afraid. She had been walking for nearly three days, and her body was so weary that she was scared that it would let her down and she would collapse here in this lonely and desolate place. Sheer willpower and thoughts of her precious Sofiya were the only things forcing her to keep placing one foot after another.

Sofiya was her joy and her reason for living. She was her vibrant and beautiful eighteen- year-old daughter, and since her husband’s death, when Sofiya was no more than an infant, there had been just the two of them, together against the harsh and unforgiving world. She would walk to the ends of the earth for her child, and right now she felt as though she was walking to the ends of the earth, but she had no choice since the night the men came and took her daughter.

She had only been away from the house for a few hours, taking care of a sick old man on the other side of the village, but it was long enough for them to gallop to her home and snatch her precious daughter. A neighbor came running to tell her that Sofiya had been taken, that four men on horseback and with daggers tucked into their waistbands had entered her house and dragged her daughter screaming to one of the horses. They had flung her over the saddle in front of one of the riders, and within minutes, had galloped away. When the woman heard the news, she sank to the floor and screamed so much that people came running from far and wide to find out what evil had occurred that someone should cry out with such pain and anguish.

One of the men, new to the village, said he was afraid that Sofiya had been taken by a band of criminals known for stealing cattle and treasure from wherever they could find it, and that they also took away pretty young women who caught their eye. He had heard of such events from people in his previous village, and the women they took were not heard from again. Some said that they were sold into slavery in faraway places.

On hearing this, the woman fainted.

When she recovered consciousness, she knew that she must find Sofiya and rescue her from whatever terror and degradation that would come from being with such men. Life without her daughter could not be contemplated. She collected some food and her cloak, and set out to find her daughter, uncertain where to go and how far she must travel.

The first night was spent in a shed with some goats, who at least provided her with some warmth, and the second with a sympathetic and kind old woman who shared her meagre supper and allowed her to curl up in front of her fire for the night. If it hadn’t been for her kindness, she feared that she might not be here now. But the night was coming again, and she dreaded the coming hours of darkness, without food or heat or shelter. She had seen no habitation for many hours and began to sink into a deep despair as she contemplated her fate. Would she die out here on this lonely track, perhaps eaten by the wild animals that surely inhabited the forest?

Just as she was about to surrender to the exhaustion and the pain in her body, she thought she detected a light through the trees. Turning a corner in the road, a large, gloomy, old castle loomed ahead; part of which was in ruins, giving it an abandoned appearance. However, the sight of a faint light coming from one of the narrow windows on the upper floor showed her that the castle was likely inhabited.

Could this be the place she was seeking?

Apart from the light in the upstairs window, there were no other signs of occupation. It looked abandoned and menacing. There may have been extensive grounds around the castle once, but now a small area of rough ground was the only open area, surrounded by dense forest that was slowly creeping towards the building, ready to reclaim it for its own.

The woman knew that there was no point in going to the entrance and begging for the release of her daughter, if this was indeed where she was being held captive. The men holding Sofiya would almost certainly laugh in her face and send her packing. She needed to convince them to let her enter the castle and stay a while so that she could work on a plan to rescue her daughter from their clutches. And how she begged the gods above for her daughter to be within these walls so she had not made the long and tortuous trip in vain.

She reached the heavy oak door and tugged the bell pull, the sound echoing in the corridors beyond. For a long time it seemed as though the bell was going to be ignored, but eventually the woman heard a shout from above. Looking up, she saw a man staring down at her from an open window.

She offered him everything, in her desperate search for her daughter

I write erotic romances as Juliette Banks, but some of you may also know me as the author Rachel de Vine. I am British and live in a beautiful rural part of England. However, I also like travelling to remote and unusual parts of the world, and have visited places as diverse as Tibet, Bhutan, Peru, Namibia and China. Our world is so beautiful and I hope that it will always remain so, and I see myself as being so lucky to have the freedom to travel that was denied many previous generations. I hope I never take it for granted.

Website            www.racheldevineauthor.com  (a site for both Rachel and Juliette)

Thank you, Mary, for inviting me to your blog, and I hope your readers have enjoyed a taste of my book.