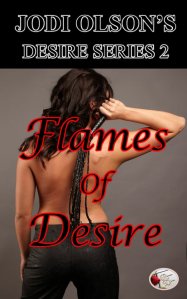 2 thoughts on “Flames Of Desire by Jodi Olsen (Series 2)”