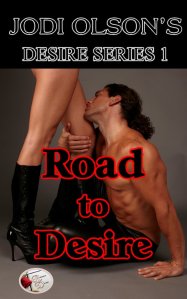 atthew had a fantasy about submitting to his wife Samantha; to be Her adoring and worshipful slave, doing Her bidding, suffering Her torments and pleasures. What will happen when this hunky construction worker gets his wish, when he is forced to his knees and used as a sex toy? It’s a kinky affair when a loving couple starts down the Road to Desire.
Excerpt 1:Thank God her mother-in-law was going to take the kids for the weekend so they could have some alone time. With Mathew working days and her working nights they’d go to bed literally exhausted. She really didn’t have any complaints, except for the lack of sex and time alone. He was great to the kids and he always pitched in around the house with laundry and other household chores as much as he could.
She studied his face unhurriedly, feature by feature. His thick black hair needed a good trim, Maybe tomorrow, because tonight I’ll bring him to his knees.
Her eyes lingered on Mathew’s hands, his skin tan from working construction and being outdoors on a daily basis. She loved his hands; those strong long fingers could do amazing things to her body. Her nipples ached for his touch and her panties were soaked just thinking about those fingers inside her. Her gaze traveled up his arm. He had perfect, sculpted muscles, not too much, but enough fo r her.
“Come into the kitchen, Mathew.” Her smile was eager and alive with affection and delight. “I need your services for a moment.” Usually she wasn’t so bossy, but wanted to see his reaction because tonight he’d be kneeling, begging for release.
“Be right there, Sam. Need to clean off Mason’s messy face first.”
“Hurry up.” Oh this is fun. I could get used to this, hope it works in the bedroom this weekend too. She watched him walk toward her. She whimpered as her gaze landed on the fly of his jeans. He was aroused, extremely aroused. She wondered if he knew what she was thinking right now. Her cheeks blushed at the thought.
“Tonight couldn’t get here fast enough, babe,” Mathew groaned.
“I know; I’m going to give you an anniversary night you’ll never forget.” Her hand traveled down his chest, stopped at his belt buckle, and she heard him make that sexy growl she loved. Her hand rested over his long, thick erection; ever s o gently she gave it a little squeeze. “I aim to have this inside me tonight, now get to work or you’ll be late again.”
“Yes, my Mistress.”
“Matthew?”
“What is it, honey?”
“Tonight make sure and knock; don’t use your key.”
Sam still couldn’t believe Matt finally agreed to do some role playing. Two nights ago he came out of the bedroom with a big box that had her leather outfit in it plus a riding crop and some other toys. He finally agreed to give into her fantasy of being her slave.Excerpt 2:

She placed the handle of the riding crop under his chin, so that his head raised and he was looking directly into her eyes. “I think ten lashes might make you learn, slave.”
She slowly circled him. “This is my first time to whip a slave and my panties are wet thinking about it. Let’s get on with your training. Remember, you’re to remain motionless and not utter a sound. Is that clear?”
She began to whip him, and then stopped. She waited, watched him. And after a minute’s pause, she began again, whipping severely to see what he was made of.
“Now slave, you may strip so that I can inspect your nude body.” She hit the nightstand with her crop. He quickly obeyed, and she ordered him to stand at attention. “Stay right there, eyes front. At this time you’re not allowed to look at me without permission. At other times, you’ll be allowed the privilege of enjoying the sight of your Mistress.”
She slowly rose from the bed, the crop now replaced with a whip in her hand, and began to inspect his naked body. She prodded him here and there with the flogger handle while inspecting him as if he were an animal. Sam touched every inch of his body; she especially took her time inspecting his amazingly hard cock.
Sam rubbed the flogger across his cock. “That looks painful. Is it painful slave? And yes, you are allowed to speak.”
“Yes, Sam it hurts. I mean…Mistress.”
A soft and loving curve softened her lips. “That normally calls for a whipping, slave. But since you corrected yourself I’ll let it go for now. Don’t do it again.” Once again she rubbed the flogger against his erection. “I heard you’ve been a very bad, bad boy today. Is that true, were you caught masturbating on the side of the road slave?”
His eyes widened, “How the fuck did you find out about that?”
“Let’s say a little birdie told me. Since you didn’t address me properly, and lied as well, I need to punish you for that.”
“Mistress, can I explain?”
“That is better. You’re mine, slave,” Her voice was low and insistent. “You’re mine to treat however I wish. And these are mine, too…” As she spoke, her fingers toyed with his balls, gently rolling them in a manner that indicated she could, at any moment, change the pressure from a sensual caress to a vicious squeeze.
“Yes, Mistress, I’m yours to do whatever pleas es you. I swear the sheriff didn’t see anything, my coat covered up my cock and the mess I made. I don’t think he even heard me call out your name.”
“You have to prove to me that you can be a good slave. Lick my boot.”
Obediently, Matt got down on all fours; he stuck out his tongue and began to lick, lapping away until the leather shone like new. “Very good, slave,” Sam smiled.
“Let’s see what else your tongue is good for.” She unzipped her skirt letting it fall around her ankles. Her black panties followed next; letting them fall on top of the skirt. Her hand grabbed hold of his hair, hauling his head upward. “Worship me,” she ordered, leaning into his face.